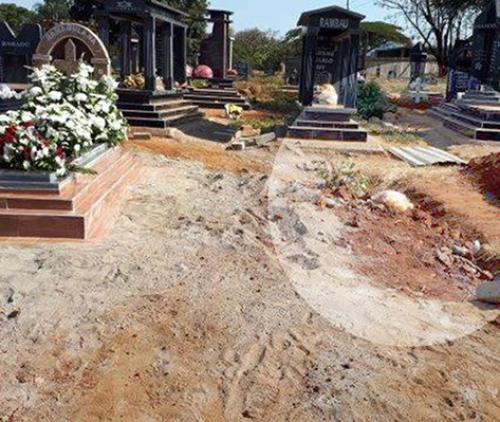 Adding insult to injury … The grave of Mr Dries Vermeulen’s mother (barely visible to the right of the photo) was almost completely decimated by contract workers who constructed a massive tombstone on the adjacent grave. The workers did not even bother to clean the site afterwards, leaving cement and bricks on Ms Vermeulen’s grave. Photo supplied.

Adding insult to injury … This is how the Vermeulen family described the latest development concerning the harsh and disrespectful treatment they suffered at the hands of the Makhado Municipality when laying to rest a family member in the municipal cemetery.

The Zoutpansberger reported last week about Mr Dries Vermeulen from Tzaneen whose mother had passed away and was buried in the local cemetery on 14 May. The experience was a nightmarishly horrible one for the family.

The family initially booked a nine-foot grave (in depth), which would allow Vermeulen to bury his father on top of his mother when he passes away. When they got to the gravesite, this hole had not been dug even close to deep enough. Apart from the hole’s being too shallow to allow for two coffins, it had been dug extremely wide on the surface, to such an extent that the funeral company had to construct a makeshift platform from which to lower the coffin. “They didn’t dig a grave, they dug a swimming pool,” Vermeulen remarked at the time.

Still that was not the end. The soil needed to fill up his mother’s grave had been dumped so far from the grave that most of the family missed the rest of the funeral proceedings back at the church because they were too busy trying to fill the massive hole. Great was Vermeulen’s shock when they returned two days later, only to find that a herd of cattle had trampled his mother’s grave.

In response to the above, Makhado municipal spokesperson Mr Louis Bobodi agreed that the municipality’s actions were indeed disrespectful to the family. He confirmed the fact that the municipality themselves are the ones who dig the graves and that this function is performed by the cemetery caretaker. “The caretaker is to be reprimanded and given further training,” said Bobodi.

Despite promises of a reprimand and action, the disrespect against the Vermeulen family continued the past week.

Vermeulen again visited his mother’s grave on Sunday to see if the municipality had at least managed to cover the grave sufficiently. What he was met with, shocked him and his father.

Vermeulen saw that a funeral company had erected a tombstone on the grave next to his mother’s grave. “All the left-over cement and bricks were just dumped on my mom’s grave. There were footprints all over my mom’s grave and it was clear that the cement mixing had been done right there,” said Vermeulen.

For Vermeulen’s father the sight was especially traumatic. “My dad started crying and while looking at the grave said: ‘What have they done to you?’ This was very upsetting, to say the least,” said Vermeulen.

Vermeulen said that it was clear that all work had been done without supervision. Like the municipal workers, Vermeulen said, the Thohoyandou-based funeral company’s workers also obviously lacked respect for the dead. “They did not even bother to clean the site,” he said.

As anger and frustration mounted, Vermeulen phoned the funeral company’s owner. “He said that the matter would be addressed with his people. I requested feedback on what actions would be taken against his people as a simple apology was not enough. I have not heard from him since,” said Vermeulen.

Vermeulen also tried to speak to the official in charge of the cemetery. “As soon as he heard who was speaking, he suddenly had to phone me back as he was in a meeting. He never phoned back,” said Vermeulen.

The Zoutpansberger asked the Makhado Municipality once more for comment on the latest development. At the time of our going to press they had yet to respond, with no indication when that would be.