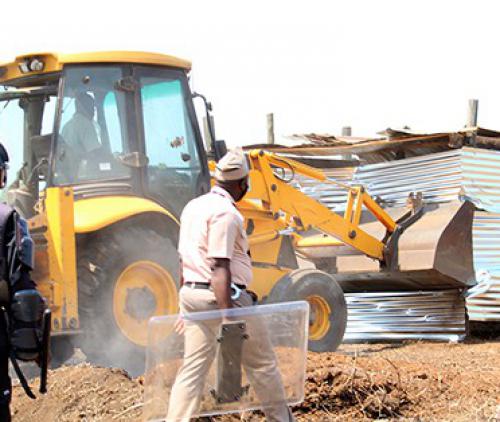 Police and security officers monitored the area where shacks were being demolished. Photo: Kaizer Nengovhela.

On Monday, teams from the Makhado Municipality moved in and destroyed an estimated 100 shacks that were built on land earmarked for development next to the Tshikota township. Dozens of shack builders were left stranded after their makeshift homes were demolished.

People erected shacks the last few weeks on a piece of land about to be auctioned off by the municipality. The shack builders are protesting against the auctioning process, saying that they had been promised that RDP houses would be built on the land.

The Makhado Municipality intends to sell 849 vacant residential and business stands via an online auction. The stands are in two newly established townships, just south of Pretorius Street in Louis Trichardt and adjacent to Tshikota Extension 1. The auction is scheduled to take place between 24 September (09:00) and 27 September (09:00). The first of the viewing sessions was scheduled for last weekend, whereas another viewing session was scheduled for 18 and 19 September.

In court documents delivered to some of the protestors, the municipality states that the first viewing session had to be cancelled because of the disruptions. The municipality alleges that a group of people started “giving away” stands two weeks ago, urging the new “owners” to erect a shack as soon as possible to secure their stands.

Municipal officials were apparently afraid of confronting the shack builders. The council also argues in the court papers that it stands to lose almost R100 million in revenue if the auction does not take place. “It is submitted that there is a risk that the Applicant’s land will be lost to unlawful occupations,” it is stated.

The shack builders, however, refuse to give in without a fight. They argue that the issue dates back further than 2018, when the municipality also had to approach the High Court to stop them from erecting shacks on the property. A court order was granted and was never contested.

In March 2018, officials and members of the Makhado Municipality’s executive committee visited the area and spoke to the residents. The then mayor purportedly promised the residents that at least 200 RDP houses would be built on the specific site to cater for the poor in Tshikota.

In the latest development, the sites are to be auctioned off in two phases. Prospective buyers have to pay a R10 000 registration fee, and a reserve price put on each stand must be met for a successful transaction. The council has not yet disclosed what the reserve prices are.

The unhappiness of residents from Tshikota hoping to get a new place to stay intensified the past week. On Friday, a few days before the shacks were demolished, a large group of people gathered at the land about to be auctioned off. One of the shack dwellers, Ms Tendani Maluba, said that they had tried to engage the municipality several times, without any success. She said that the former mayor, Cllr Shonisani Sinyosi, had promised to build 250 RDP houses for needy community members.

“We have got kids who are not married, so their kids have to have their own shelter in the future. When you die, and then your kids don’t have a roof where they can put their head down, and then it becomes a problem. Some of the kids become street kids because they don’t have any place to sleep,” she said.

“I was so happy when I could stay in my own place here, but it was terrible when they demolished our shacks and destroyed our materials,” she said. “I guess I will just keep trying to get my own place. There’s nothing else I can do,” said Maluba after the shacks were demolished on Monday.

Another resident, Mr Mahlatse Mathekgane, said that the residents had occupied the farm after they had heard that Makhado Municipality was selling residential and business stands on the site by public auction. “This completely disregards the poor people of Tshikota. We decided to occupy this land because we are from poor backgrounds and cannot afford the money for bidding nor buying those stands,” he said. He said that the municipality was in breach of its promise. His shack was also demolished on Monday.

“We came here because we don’t have money and we need a place to live. This land has been standing empty for years. Our municipality is not right, and they still want us to vote. Let it be clear: we will not vote if this is how we are treated,” said another resident, Ms Josephina Msiza. “They see us as staying here illegally, but when it’s time to vote, they want us all to vote.” She said most of the residents would not be voting in the coming elections.

The Makhado Municipality’s spokesperson, Mr Louis Bobodi, said that the municipality had obtained an interim court order in the Limpopo High Court last week. The interdict forbids the allocation of stands and the erecting or the extending of structures by the land occupiers. It also authorises the municipality to demolish any complete or incomplete structure, occupied or not occupied, erected on the property.

Bobodi said that the municipality had included a low-cost housing scheme in its 2021/22 budget. This entails building 100 RDP homes on a different piece of land. “No shack can be erected on land which was not purchased or hired. So, in terms of the act, those shacks were illegal,” he said.