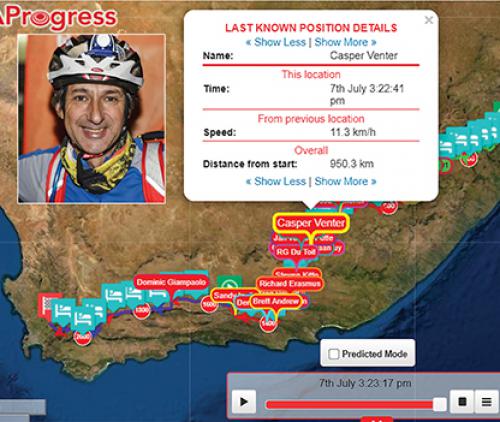 At the time of going to press on Wednesday, Dr Casper Venter (inset) was nearing the 1 000km mark of his epic attempt to complete the annual Freedom Challenge over a distance of 2 150km in less then 15 days. He set off from Pietermaritzburg on 1 July with the race finishing in Wellington. Residents can follow his journey by visiting https://www.freedomchallenge.org.za/ and clicking on the “live tracking” link. This is a screen capture of the map.

Well-known Louis Trichardt adventurer, cyclist and also a medical doctor, Dr Casper Venter, was well on his way to the halfway mark of the gruelling Freedom Challenge on Wednesday afternoon. On the seventh day of this cycle race across the breadth of the country, he has already completed close to 1 000 kilometres.

Casper started off in Pietermaritzburg last Thursday (1 July) on what can easily be described as one of the toughest challenges in South Africa, if not in the world. This is a race that takes the cyclists across the icy cold mountain slopes near Lesotho, down to the Eastern Cape and eventually finishes in Wellington in the Western Cape. The route stretches across 2 150 gruelling kilometres, cyclists ride unassisted and mostly on gravel roads and single-track sections. They need to have exceptional navigation skills, using only maps, and need to carry the essential stuff such as food for the day and clothes with them.

A total of 56 riders embarked in batches from Pietermaritzburg, but thus far many of them have had to retire. The race favourite, Alex Harris, had a nasty fall on the second day but still carried on for 140 kilometres with a broken rib before he retired. Alex is the current record holder, having finished the race last year in under 10 days.

On Wednesday afternoon, Casper was among the top four riders in the race, and he had already completed 950 kilometres. He was leaving Cradock and heading to Pearston in the Eastern Cape. The morning temperatures along the route dropped to well below zero, making life even more difficult for the riders.

He previously told the Zoutpansberger that he aimed to finish the race in less than 15 days.
Casper’s wife, Sarah, said on Tuesday that he was in good spirits, although the race is very tough. “He didn’t have the intention of winning the race, but with all the front guys falling out like flies, who knows what could happen?” she said.

The first part of the race is very difficult from a navigational perspective, Sarah said. Casper’s plan was to start off at a reasonable pace and then increase the tempo as they hit the Karoo, where navigation is slightly easier.

On Wednesday, the race leader was Fjord Jordaan, who had already completed 1 050 kilometres. During the first few days, Axel Poser rode alongside Casper but then went ahead to chase Fjord.

The cyclists normally start in the early morning hours, and competitors such as Fjord and Axel often ride until late at night. The route is laid out in such a way that a resting place is available roughly every 50 kilometres. These resting places are often farmhouses where the people cater for the adventurous cyclists. Before the race starts, the cyclists can also send food, clothing, and equipment to these resting places along the route.

If all goes well, Casper expects to arrive at Diemersfontein in Wellington next Thursday (15th). His progress can be followed at: https://freedomchallenge2021.maprogress.com/#