5. Piet de Vaal, the stately “baobab” of the Soutpansberg

De Vaal Street is a somewhat unusual street. It starts near the high school and then makes its way up “skuldbult”, crossing Barnard Street before turning left sharply and running alongside the forestry plantations. It’s almost as if it passes by the wealth and glamour to reach a place of serenity and beauty.

The street was named after one of the region’s true gentlemen, Piet de Vaal. During his lifetime he wore many hats, among others those of attorney, mayor, painter, historian and writer, but he is mostly remembered for his modesty and honesty.

The story of Pieter Hendrik Carel de Vaal started on 19 March 1923 on a farm near Solomondale, some 40 kilometres from Polo­kwane in the direction of Munnik. He was the youngest of 11 children. The first five were born in the Mooketsi area, but died of malaria. His parents then moved to the Soekmekaar area, where they farmed, but the constant fog and drizzle made his father decide to rather buy a piece of land near Solomondale.

It is told that his aunt, Tangie van Rooyen, who was a midwife, assisted with his birth. He was born with a chest problem – in today’s terms, probably pneumonia or bronchitis. His aunt helped to nurse him and recommended that he didn’t wear any vests. This, apparently, assisted his recovery and may be the reason that he refused to wear any vests in later years.
He always talked with a lot of respect of his parents, Jacobus Bernardus de Vaal and Carolina Margaretha Wilhelmina (née De Jager). Hardworking and dedicated people – setting the example for their children. Farming at Solomondale became difficult because of the drought during the late 1920s. An opportunity to move was created when Joe Albasini, a direct descendant of the legendary pioneer Joao Albasini, offered to sell them a portion of the farm “Goedehoop” not far from Louis Trichardt. Joe was married to the sister of De Vaal’s mother. Piet was only about four years old when they moved.

In spite of having many siblings, Piet had a fairly lonely childhood. His older brothers and sisters were away during school terms, attending boarding school. A nearby farm school with two classrooms was established on the farm of Paul Fick just before he had to start Grade 1. It was called the Ratomba Government School. The only “transport” to and from school was on the back of a donkey.

When the time arrived for him to also move to a bigger school, he was sent to the then Pietersburg. After only one term there, a few days before his 12th birthday, his mother passed away. He was then sent off to attend boarding school in Louis Trichardt, where he stayed until Standard 8.

In later years, Piet de Vaal fondly recalled his school years in Louis Trichardt. He had a lot of respect for his then teachers, Mr Hannes de Jager (Afrikaans and History), Mr S.A. Antonites (English, Geography and Accounting) and Mr Engelbrecht (Mathematics). Standard 9 and 10 had to be completed in Pietersburg, as the local school’s highest standard was standard 8.
Finances remained a problem for the family and his parents were forced to sell the farm. After finishing his matric, Piet had aspirations to become a teacher, but he needed a bursary. He arrived in Pretoria at the teacher’s college and had to undergo a medical examination as a prospective beneficiary. The doctor found a kidney defect – probably due to bilharzia that he had contracted as a child. (Legend has it that he escaped from Elim Hospital and ran away while receiving treatment.) His plans of becoming a teacher now belonged to the past. Fortunately for him, he could stay with his eldest sister, Carolina, and her husband, Louis Fourie, near Rosendal in the Free State. There he assisted with everything on the farm until the end of July 1941, when his life was to change dramatically. Mr Eddie Rooth, of the then firm Rooth & Coxwell in Louis Trichardt, contacted him and asked him to come and see him. After this interview, he was appointed as “article clerk” and worked while studying part time. Within five years he had qualified and continued working for the firm.

In 1946 he married Maria Isabella Venter (Marietjie), a young teacher he met while doing his internship at Rooth & Coxwell. The marriage took place in the Dutch Reformed Church in Louis Trichardt. They had five daughters.

De Vaal was seconded to Rooth & Coxwell’s offices in Messina from 1950 to 1952. After Mr Rooth’s death in 1952, De Vaal took over the work as deputy sheriff from Mr Rooth. De Vaal remembered Mr Rooth (also a Member of the House of Assembly for the Soutpansberg District), as one of the most professional and capable attorneys he had ever met. In the same year, he started his own law firm in two rooms in the Hanlon Building.

As a law practitioner for over 40 years, many interesting stories came his way. He often told the story of the town’s famous murder case. Two plumbers, Bubb and Lingervelder, came from the Witwatersrand to work on a project. Bubb’s wife stayed on the Rand, whilst he started an affair with Lingervelder’s wife, who had accompanied her husband to Louis Trichardt. An argument about the affair led to the murder of Lingervelder. Bubb buried the body in his garage at home and asked a labourer to demolish and burn a wooden crate/coffin on his bakkie. The labourer noticed blood on the wood and reported it. Bubb was hanged.

Piet de Vaal was constantly busy and served on a number of boards and committees. He assisted where he could to develop, maintain and improve the community. He was a founder member of the Soutpansberg Chamber of Commerce and the local Rapportryerskorps. He served on the boards of the local schools, the hospital and the church. “He always had meetings to attend and he worked extremely hard,” remembers his eldest daughter, Linette van der Merwe.

When he started serving on the town council in 1958, Louis Trichardt still had a sewerage system comprising septic tanks and night-soil carts. A sewer network was constructed that alleviated this smelly and unhygienic problem. The water problems were also addressed by establishing a pipeline to pump water from the Albasini dam. He was mayor of the town for almost three years.

He was known as the most honourable of attorneys. His honesty is still on the lips of many inhabitants and there are many examples. Late one evening, while preparing to go to sleep, he realised that the café owner had given him too much change. He got up, got dressed, and drove immediately to return the excess amount. A former client recently remembered that he once received a cheque of R10 in the mail. This was apparently for a mistake made and he had paid too much for work done. His daughter once picked up a R2 note, way back in the 1970s. Very happily she showed it to him, just to be disappointed when he said it had to be handed in at the police station – it might have been somebody’s last money…

During 1957, De Vaal managed to buy a portion of the farm Goedehoop where he had grown up. There he farmed part-time with cattle and mangoes. This is also where his heart was. He loved to paint Piesangkop – the view from where they stayed. He always felt sorry for the monkeys he caught in cages (they were stealing fruit). He always “talked” to them before setting them free again.

Piet de Vaal also left his mark as an artist. Due to his work over a vast area, he came to know almost every farm and baobab tree.  The uniqueness of the Soutpansberg, its people, its beauty and vegetation inspired him to be an artist. The bushveld was his passion. The baobab tree was almost personified in all his artworks. When he painted, the baobab wasn’t approached as an onlooker; it was painted from the inside. To him, each and every tree had a soul and character. These giants were depicted against a conglomeration of colour – creating some kind of gentleness.

He had a good relationship with the painter Erich Mayer. They exchanged some ideas. As a young boy, he saw a man sitting in some long grass, looking towards the church on the hill (Haantjiekerk) and painting something. He is convinced that it was the artist Pierneef – busy with his famous painting “View of Louis Trichardt”.

Not only the people of the Soutpansberg District remember him well – De Vaal wrote down many of his memoires. The main reason for this is that he was an amateur historian and realised the value of preserving information for future generations.  He built his own archive whilst doing the research for his book, Die Dorp Louis Trichardt, published in 1986 and reprinted in 2013 – just before his death.

He spent the biggest part of his life in his favourite town – Louis Trichardt. For 58 years he lived in the same house.

When he died on 15 August 2013 at the age of 90, the eulogies kept on streaming in. Suwil Rudolph, one of his successors, got to know him well when he accompanied him on his trips in the district as assessor. “De Vaal was a real gentleman. When a lady entered a room, he always stood up, and only sat down again after she had been seated. As a matter of fact, he always lifted his hat when anybody, young and old, entered a room,” he recalls.

He was always firm but fair. A serious person, but also with a good sense of humour. Rudolph remembers that he would never accept an offer for tea unless the work had been completed. If they had to travel a long way, he always had a basket with a flask, a tablecloth and a snack, such as a sandwich or rusks. The tablecloth was spread over the bonnet of the car and the tea poured. What many do not know, is that he was a boxer in his younger days and also had his pilot’s licence.

“He was an iconic figure in the Soutpansberg. His legacy lies in the hands of his very capable children and will thus continue to add value to the community he served,” said another well-known local historian, Charles Leach. He left behind five daughters, Linette van der Merwe, Caromin Louw, Milda Stanton, Inarié de Vaal and Pétria de Vaal-Senekal. The eldest and youngest still reside in Louis Trichardt. For his family he was like the baobabs that he so loved to paint. “Immovable from the outside, but gentle and peaceful on the inside. He was a man of God. A family man. A community man. A businessman.” 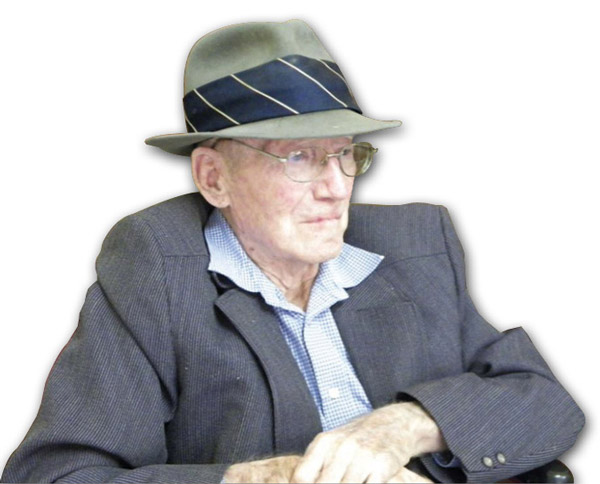 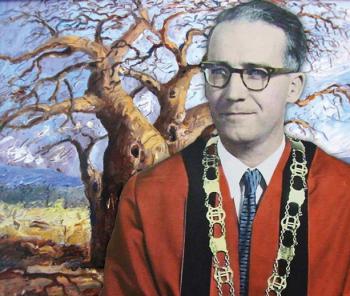